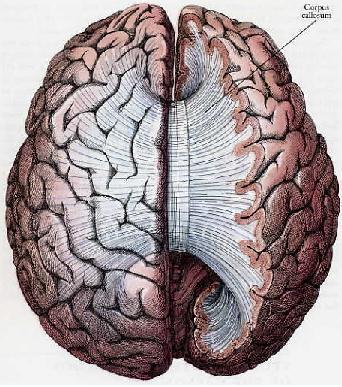 At the coffee shop, I overheard two fellows discussing the opposition between hemispheric thoughts. They agreed upon on various points:

However, after those hemisphere traits, they leaped to the claim the two hemispheres work with separate realities and that they are at war with each other.

The two list items I have minor quibbles with, but the claim of separate, conflicting realities is quite misleading. It deserves demystification.  The hemispheres serve complementary functions. Rather than at war, they work together to provide the best decision in the time available.

The hemispheres start from the same external reality and, through the corpus callosum, share and compare their current assessments of reality many times in their trip from sensory lobes to the executive lobe where decisions are made.

The dominant (left) hemisphere generates language and, as a consequence, can use logic and time, which allows it to plan actions by future effects. Cultural and academic learning takes place through words, resulting in this cortical half having knowledge that is available only to logical, verbal thought.

The other hemisphere (right) considers the current situation for immediate satisfaction and safety. It accomplishes its weighing by superficial similarity, not logical relationships. It cannot use many cultural and most academic bits of knowledge. This hemisphere has a more personal, idiosyncratic worldview.

The hemispheres have complementary worldviews rather than conflicting worldviews.

The other hemisphere (typically, the right) is labeled non-dominant, but that doesn’t imply subservient, but non-verbal. These lobes use patterns. Patterns a person learns from their particular experiences. Another distinction is that sequences of thoughts are linked by association. Patterns which have similarities with the current pattern arise in one’s thoughts. The non-dominant hemisphere task is to always have a ready response to the current situation.

Playing basketball provides an excellent example of the non-verbal (right) hemisphere in charge. One must continually respond to other players’ positions and one’s own goals. Words hardly come to mind; the goals are not long-term, but formed within the scope of the game.

Rock climbing is another case when non-verbal thought controls actions. Immediate reaction to positional challenges is paramount. The verbal hemisphere shifts to a low gear. The control of the right hemisphere is nearly absolute.

With Time to Decide

Meditation offers an excellent insight into the flux between the hemispheres. Although my initiation was transcendental meditation, meditation here means a situation that allows isolation from physical change. Closing one’s eyes while sitting comfortably with no auditory input allows you to enter a meditative state. No mantra necessary.

At the start, often words guide your thoughts. You may think about earlier events and potential future events. As time goes on, those threads play out and you notice thoughts and desires which ring true but often escape you attention, drowned by the noisy churn of words.

At some point, you may put these nebulous thoughts of wishes and desires, and maybe fears, into words. The dominant hemisphere, finally aware, applies its logic power upon the right hemisphere’s wish, attempting to find paths to future situation where it may be realized.

We are often forced to act before the dominant hemisphere has considered all the options available.

How do we decide which of the two hemispheres should be followed? When it’s a life-or-death decision, we take that of the hemisphere that is always ready, the non-dominant (right) hemisphere. Otherwise, most people tend to one hemisphere or the other, but the particular situation can make us pick delayed gratification one time and immediate satisfaction the next.

Since society has removed immediate starvation and imminent threats, the hemispheric tie-breaker depends mostly on your personal history, the early experiences which confirmed either immediate satisfaction or delayed gratification as your best choice.

That’s not much of an answer; however, with the broad separation between people who grab for the gusto and those that plan every step, it should not be surprising that general statements disappoint.

Perhaps if you were denied pleasure as a child, you will favor immediate pleasure when the situation allows it, even when future gains may be greater.

Also with so many variables, uncertainties, and other people working at cross-purposes to our desires, it’s no wonder our best decisions often do not have the desired result.