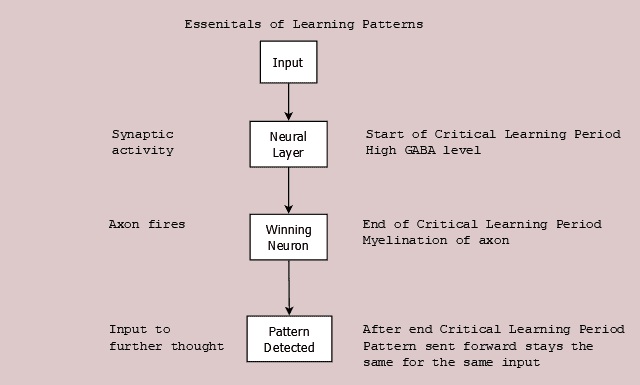 Neuro-biological conditions explain the existence of critical periods in the most fundamental skills that we learn in the first decade of our life. The focus here is the development of vision and language.

During the critical period of vision (birth to about age 2), the neural synapses in the occipital lobe rapidly adjust their efficiency in transferring the electrical signal across the gap in response to visual input. This rapid adjustment is traced, Kalat p 178, to the occipital lobe’s suffusion with gamma-amino-butyric-acid (GABA). GABA supports rapid adjustment of synaptic weights to new stimuli. Learning proceeds rapidly while GABA is present in greater quantities.

The visual centers eventually send their determination of the pattern discerned to aggregation centers where the information is mingled with hearing, smell, body position, memories, and so on, on the journey to the conscious, decision-making areas of the frontal lobe.

At a very high level, the visual layer has two purposes. First, identify the contents of the visual field. Second, send that information to other areas (modules) of the brain for further integration to our internal worldview. They identify and categorize by synaptic adjustment. The communication is sporadic until axon myelination is complete. Until then, the output of the disconnected modules does not consistently contribute to our overall understanding of the world.

End of the Critical Period

When the visual center’s terminating axons have been coated with myelin, their signal is carried fast and without loss to other areas of the brain. The completion of the myelination marks the end of the critical period. For vision this physiological function is complete by age 2.

Manfred Spitzer (p 179) discusses myelination as having three main stages. In a more recent book, R. Douglas Fields (p 282) in The Other Brain reports that experimental data now shows that myelination does not complete with the decision-making areas of the prefrontal lobe until a person in their late twenties.

Academic learning occurs primarily in the frontal lobes, where the synapses retain a certain flexibility for continued change. Within the frontal lobe, information (situations, actions, and possibilities) are exchanged between the gray matter (non-myelinated axons).

An increase in the GABA neurotransmitter marks the onset of the critical learning period. This physiological chemical permits more rapid classification of input signals into patterns. Of course, if those types of experiences (input signals) are not presented during the critical period the patterns are not learned.

The action of oligodentrocyte cells coat the axon of the terminating neurons of a module in the brain devoted to a particular task. That myelination is completed roughly at the same time as the GABA level decreased.

Although the focus here has been the cortex, the connections between the hippocampus (in the limbic system) are also being myelinated in the years after birth. As Vincze Andras (p 6) remarks, “It is known .. the characteristic, adult-like, long-lasting memory formation cannot be dated before the 5-8 years of age.”

That explains what memories are so scarce from early childhood. With our emotions also arising in the amygdala of the limbic system, our particular experiences during the early critical period of those axons which rise to the cortical lobes will heavily flavor our view of the world.

At the termination of the critical period, the patterns that have been identified by the neural layer are basically fixed and will not easily be changed. The capability for new learning remains; however, it takes more extreme magnitude and/or frequency of novel input to learn a new pattern after the critical period has passed.

Also as mentioned earlier, learning in the more abstract of our reasoning centers, in the frontal cortex, continue although the ease of new learning decreases as the level of GABA is everywhere reduced with age.

Behavioral norms and cultural categories are also affected by the learning critical period. Their critical periods piggyback onto those controlling physical maturation, discussed further in Maps in the Brain.