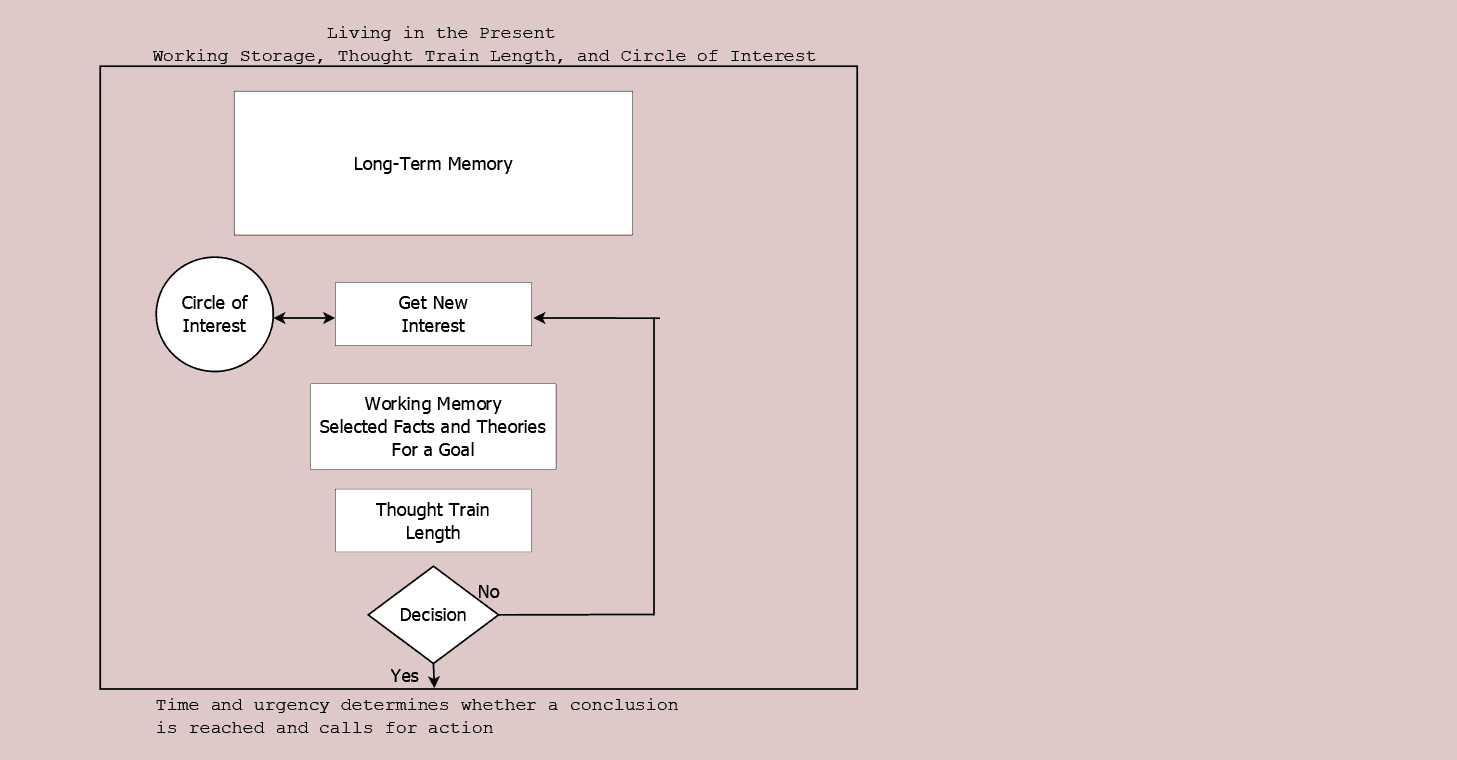 The number of neurons and interconnections in the human brain are so enormous that it might seem ludicrous to consider the brain as finite and constrained, but it is.

The thought train and circle of interest combine to direct your mind along certain paths and not others. This post will develop these points and connect them to the neural properties of brain.

Let’s start with the Wikipedia definition of train of thought.

The train of thought or track of thought refers to the interconnection in the sequence of ideas expressed during a connected discourse or thought, as well as the sequence itself, especially in discussion how this sequence leads from one idea to another.

The connected nature of thoughts and how this connection arises are crucial elements of the concept.

Neural networks automatically abstract. Bullet pointing features of the neural brain made in Associations and Level of Abstraction, we have

Our thought train does not go on indefinitely. Its length is limited, either by the choice of behavioral action or by increasing loss of fidelity to original stimulus that blurs into a new interest.


Our capacity to hold limited chunks of information in awareness, Working Memory, is an experimental observation of one aspect of our finite capacity to analyze our situation. Alan Baddeley, a premier investigator into memory, (p 23) writes that six or seven is the number of digits most people can manage at once, although he notes across all humans range from 4 to 10 or more.

The idea that we think a sequence of thoughts is very old. The explanation of the relationship between those thoughts have two main threads.

This working memory limitation is in the frontal cortex. Torkel Klingberg in Working Memory postulates that working memory evolved 40 thousand years ago, to support language and complex social organization.

We are not idle spectators in the situations we find ourselves in. Our primitive demands (Satiety, Sex, and Safety–the 3S Imperatives) shaped by our experiences develop into needs, goals, and fears which guide our attention. These nodes of interest provide the focus of our thoughts and when our thought train on one line peters out, another node of higher urgency becomes the source of a new thought train.

Evidence of Circle of Interests

Meditation is a direct way in which you can see the effect of a limited thought train length. When you restrict change to the external environment and your reaction to it as much as possible, those needs, desires, goals, and fears that are specifically your own rise in your consciousness, no longer masked by the environmental cues of others’ concerns, of society’s concerns, of themes in music and shibboleths of the media. The longer you go without hearing them, the more prominent your own internal signals rise to prominence.

How is that accomplished?

The thoughts that rise have a limited duration, to be replaced by new thoughts which reflect your personal interest.

The diagram above puts it all together, the finite brain and granular mind.

We are not infinite calculating machines grinding through every reality pathway on our way to the best decision. We are constrained entities searching partway on various pathways for behaviors to satisfy our needs and goals while quelling our fears.

Speech and Neurons discusses nature-nurture as shown in Broca’s area development from birth to age two.