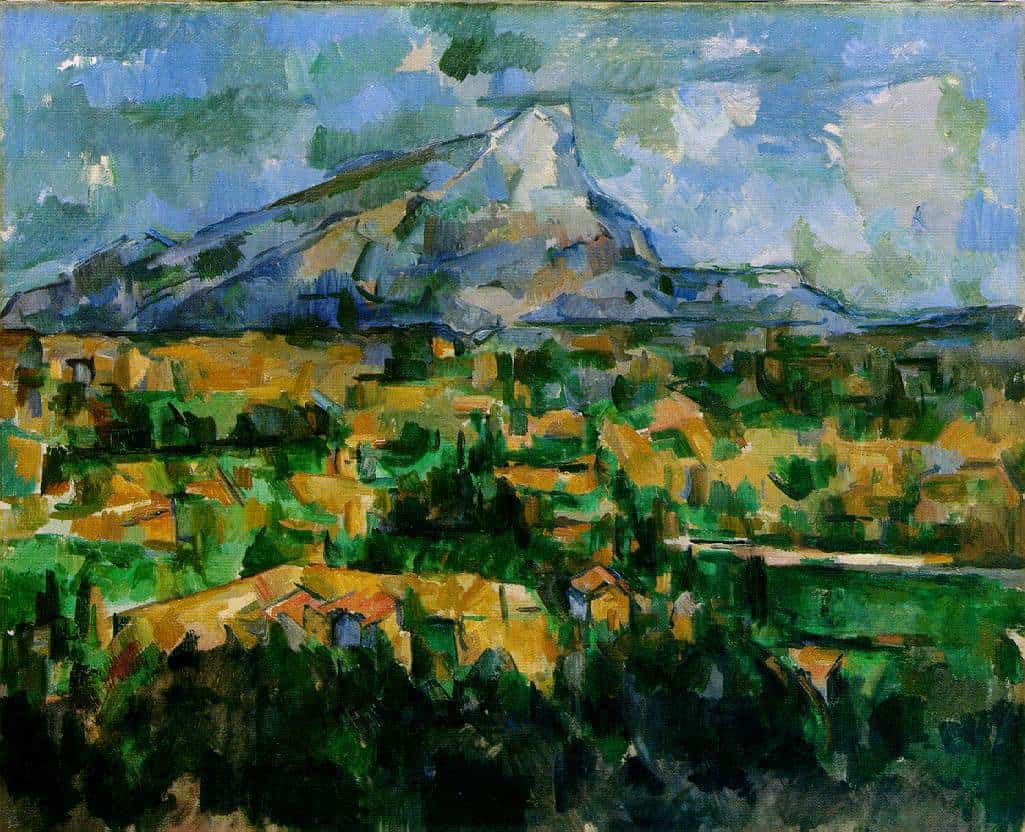 Induction is a process of thinking we all use whether we call it by the term ‘induction’ or not.

Induction, the method of reasoning from a part to a whole, from particulars to generals, or from the individual to the universal.

The method of going from part to whole in reasoning is the method I described in my recent post on intuition, resulting from partial pattern matching.

In Figure 1, we see a table,despite the missing edges hidden by the plate, the glass, and  and the wrapped bottle. We assume the entire table is there.  In Cezanne’s painting of Mt. Victorie (Figure 2), we imagine a mountain and other forms from splotches of shapes and colors we are suggestive of the whole rather than portraying the entire scene.. Even the paragons of logic, scientists, use induction (Figure 3) as Ptolemy’s orbital system of the planets circling the Earth, which led to conclusions that could be tested. Scientists use incomplete data to form hypotheses that can then be tested against their predictions.

You might already be thinking–sometimes we make mistakes when we do this, when we use induction. And that’s true, but that does not mean induction is not thinking. It means it is not perfect. Despite that it has the great advantage that when information is not completely available we can make decisions with it. Here’s a little example of an error arising from induction, based on Bertrand Russell’s The Problems of Philosophy.

A. Particular facts. A person feeds his chickens every day.
B. General rule. The chickens expect food when they see him.
C. Exception to the rule. The man wrings the chicken’s neck on its last day.

D. Induction from particular facts to general rule can lead to a false conclusion.

Repeated testing of inductive conclusions is step that prudence demands.

Immanuel Kant (1777-1850) separated knowledge that is rational (derived from experience and deduction) and that is intuitive.

Intuitive is defined as the power of obtaining knowledge that cannot be acquired either by inference or observation, by reason or experience. As such, intuition is thought of as an original, independent source of knowledge, since it is designed to account for just those kinds of knowledge that other sources do not provide.

Since then we harbor deep suspicions of knowledge that we claim to have but can’t explain it logically. If one say our intuition tells us something is true, others feel free to chide us to prove it. Although we may act on it as if it is true, we can’t prove it.

However the notion that intuition is an “original, independent source of knowledge” is wrong and better explained as partial pattern matching. Why? Because that allows us to understand and investigate our beliefs that arise from intuitions.

Intuitions, partial pattern matches, exist in our mental worldview from sensory perception to integration perceptions to understanding our current situation in light of our memories and our beliefs underlying the relations between events.

Intuition is usually unconscious, arising in earlier stages of thinking (the 3S Imperatives),

Induction is conscious intuition. It occurs in our cortex, more specifically in the prefrontal-temporal nexus, in which we can make decisions based on the facts, as we know them. We—as scientists do—treat our inductive conclusions as facts and see what additional conclusions we can draw. We pick our actions and behavioral choices upon those inductions.

There are other linguistic features which indicate that an intuition-like partial pattern matching is important to our thinking.

A parable is a simple story used to illustrate a moral or spiritual lesson. Most of us know some, like “The Boy Who Cried Wolf” and “The Tortoise and the Hare.”

Metaphors point out similarities between concepts not identical. It is but an easy step to wonder and perhaps consider that the similarities may extend to other aspects of the distinct concepts.

Metaphors work when parts of two concepts match, allowing us to consider that other parts may also match.

Of course, Aristotle in De Poetica stimulated my thoughts:

The greatest thing by far is to be a master of metaphor. It is the one thing that cannot be learned from others; and it is also a sign of genius, since a good metaphor implies an intuitive perception of the similarity in dissimilars.

Analogy, a comparison of two otherwise unlike things based on resemblance of a particular aspect (Merriam-Webster). Let me give a negative example, which is a good warning about over-reliance on generalization from a few facts to a general rule. I heard this analogy from one cynic who squelched many proposals:

That’s as useful as rearranging deck chairs on the Titanic.

There might have been only one similarity between the Titanic’s plight and the current problem, and that is–they are both problems. The analogy was often misapplied.

The level of intuition and rationality that people have varies—not by IQ, but by the amount of partial pattern matching that must take place for the person to see a similarity. That is a function of the genetics of your neurons. I develop that methodically in Mental Construction, particularly in the Almost Gate.

If you dismiss inductive arguments, perhaps his post will sway you to acknowledge that intuition plays an important role in our thinking and behavioral choice. Also to consider intuition as beyond investigation is to shortchange an understanding of yourself.