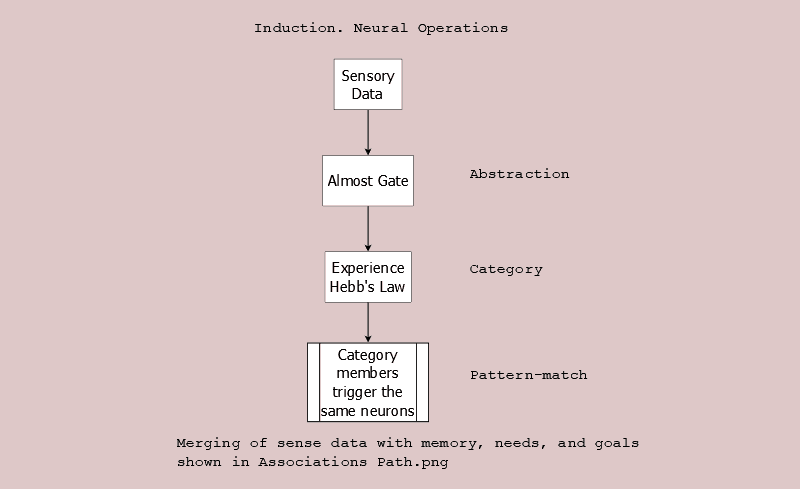 In prior discussions on induction, the focus was often the psychological aspects. Here the focus is on the neurological processes that occur which we experience as induction.

According to the Encyclopedia Britannica: Induction.

The inference of a generalized conclusion from particular instances. …

Inductive reasoning means reasoning from known particular instances to other instances and to generalizations.

In the diagram Induction, neural operations, the focus is showing the general process.

Detail (dendritic input) in the pattern beyond that to surpass the neural threshold is not communicated to neurons connected to the output axon. The loss of that detail is an abstraction. The abstraction does not occur a single time, but a number of times as the sensory path performs its operations and then when memory comes into play as well as when our emotions, the limbic manifestations of the 3S Imperatives, merge in. Discussed in more detail here.

The abstractions of the first step provide the raw material for categorization. This categorization depends on our repeated experience with the sensory data as well as derivative patterns downstream. Hebb’s Law provides the organizing principle. Repeated firing of sets of neurons make it more likely (more easy) for them to fire the next time some of them are triggered.

Once a pattern triggers the same set of neurons as any category member does, the downstream action of the pattern is the same as the category, In less precise terms, the pattern-match has been found. It is not a substitution of the category for the pattern, but an alignment due to a similar path through the neural layer.

Level of Abstraction and Local Effect

In addition to there being many levels of abstraction at which a productive match to a category may be found, it’s also important to recognize that the originating sensory pattern is not restricted to a single hierarchy. For instance, when some preliminary visual processing is done, intermediate results are sent in at least two directions – for Where and What determinations.

The vast multiplicity of terminals off a single axon are known to connect axon outputs to multiple areas of the brain. For clarity, the earlier discussion focused on layers of closely connected neurons, not these distant areas which operate in a similar fashion, but isolated from each other.

With induction now grounded in neurological properties, one must wonder–how does the neural brain perform deduction?

That is beyond the scope of Mental Construction, but a few thoughts are offered throughout.