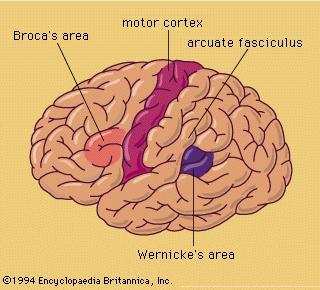 People often say things like “I’m right brained. I’m creative,” or “I’m left brained. I can figure out any logical problem.” Although that’s a fun topic for casual conversation, the left-right distinction is exaggerated and inaccurate. However, let’s not neglect the real distinction. This post focuses on one function, language, which is related to identifiable locations in only one side of the brain.

Laterality is the dominance of one side of the brain in controlling particular activities or functions, or of one of a pair of organs, such as the hands or legs. Language is a crucial and very human function with laterality. According to available data, 94% of all humans use the left hemisphere to generate speech and understand words they hear.

I will simplify by referring to the hemisphere performing language processing as Left, although in 6% of the people language is processed in the Right hemisphere. The important consideration is that one side is dedicated to language while the other is free from that requirement.

Two more specific language areas have been identified in the left hemisphere – Broca’s and Wernicke’s areas.

Broca’s Area has been identified as essential to our ability to generate speech. It is located in the frontal lobe, near the muscular control of throat, lips, and larynx, with neural connections from the prefrontal lobe where decisions on what to say are made. It also has a bundle of nerves, the arcuate fasciculus, connecting it with Wernicke’s Area, the other major language-focused part of the brain.

Wernicke’s Area is essential to our understanding of speech. It is located in the temporal lobe, as the outer part of the auditory system, after vibrations are converted to morphemes and then to words.

With language, we are comprehending experience for ourselves and translating it into words. We also compose thoughts into words to share and discuss with others.

The left brain focuses on literal as captured by words and logical as derived from the literal. It takes time for the words to be assigned (100 Step Rule) and then more time for the results of logical thinking. It also takes effort to think logically.

Due to the time, the effort, and the potential consequences, the left brain focuses on planning beyond the immediate present.

The right brain, as has been shown, specializes in spatial analysis, although the laterality is not as exclusive as in language. Spatial analysis includes not just what is “out there,” but its physical relationship to our body as well.

The right brain retains the evolutionarily important function of responding to the immediate situation.
Sensory patterns are categorized but retain some of their imperfections in categories that words obscure. There is communication between the two sides of the brain.

The corpus callosum is a wide band of 200 million neural axons that synchronize information across the brain’s central divide. It connects the left hemisphere world interpretation with the right hemisphere’s, from early in sensory processing all the way to the deliberations in our executive areas of the prefrontal love.

Soon after the left brain has a language description of a part of its current situation, it sends that information to the right brain. The right brain can use that information, if it hasn’t already reacted to the stimulus (it can take ¼ to ½ second for the verbal assignment to be made).

The separation of function is sensible whether or not assigned properly to an individual hemisphere or even brain region. It’s just nice that the independent functions seem to be broadly aligned with one side of the brain or the other.

Mental Construction develops in greater detail the source and implication of dueling logical and association modes of thoughts, without any references to hemispheric locations.