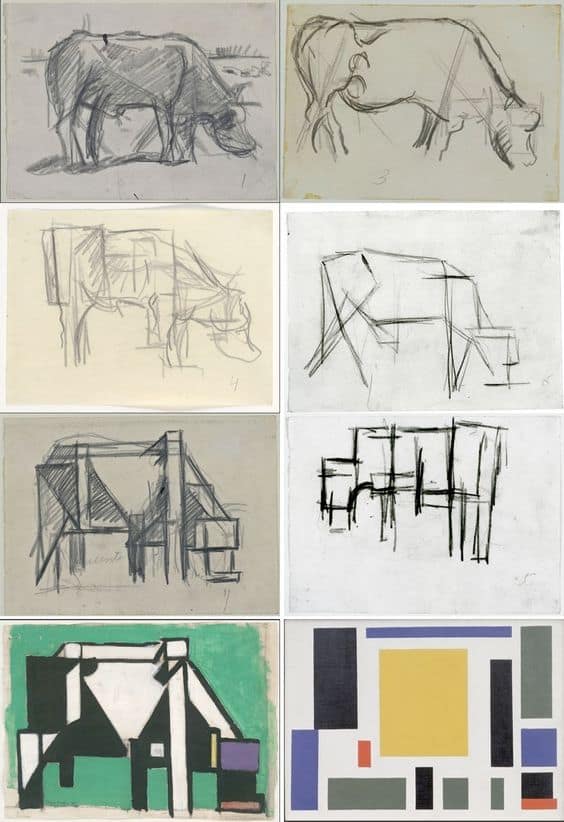 Induction is essential to a broad spectrum of our thinking, from categorizing our surroundings to choosing our next action, from artistic creation to scientific discovery. Let’s consider the many faces of induction.

Terms of Inductive Thought, reflecting both successful and unsuccessful inductions

Induction occurs when association, rather than logic, drives a sequence of thoughts. A well-known example is free association. How are associations related to induction, going from the specific to the general, you might ask?

Induction requires abstraction and repeated experience that places instances into categories. These categories then become templates for extrapolation from specific to general on each step of the concept elevator. These categories (templates) can be triggered by various initiating instances, which leads them to be equivalent in that sense. Ergo, any instance can be substituted for another in its category, at this abstraction level. That becomes meaningful, because we can perform logic on the instances and their up-or-down abstractions. From them, we can derive different likely results of our potential action choices.

Extrapolating from the specific to the general, strips away extra details and formulates its rule across a domain of many instances. Diagram at left highlights that distinct triggering events get placed in shared categories. All elements in a category are eligible to be substituted for any other element in the domain, which then is exchanged with remote areas of the cortex, often with the same initiating impetus which has been categories in that distant area differently. Different consequences, arising from distinctions in ignored details, provide substance for altering the current situation for different results.

The 100-Step Rule summarizes observed reaction time and measured neural response times. The rule states that about 100 neural transitions must occur between sensory reception and behavioral reaction. Many neural transitions (passing various Almost Gates) occur in parallel. This parallelism occurs not just across diverse senses, but within senses. The neural visual pathway is not sequential, but parallel. Categorization (identification) of object, movement in the visual field, and location of object proceed along distinct paths prior to the integration we finally perceive.

Thus an inciting stimulus may be placed in a common category in one pathway while distinct categories in the other paths. It’s entirely likely thaat similar parallelism with subsequent integration occurs throughout the uniform connectivity that exists in the human cortex.

Of course, with the intense interconnections across the corpus callosum, a thought train can switch from association to logic and back in the preparation for our decision-making.

Also, induction does not require a conscious decision to use it. It is the natural operation of the brain’s neural construction.

Corpus Callosum Step-by-step impact of cross-hemisphere communication
Mindset: Stimuli to Concepts Induction is involved in every step
Associations and Level of Abstraction Induction leads to abstraction supporting associations
Concept Elevator Sensory data merges with memories and knowledge on the journey to the frontal lobe