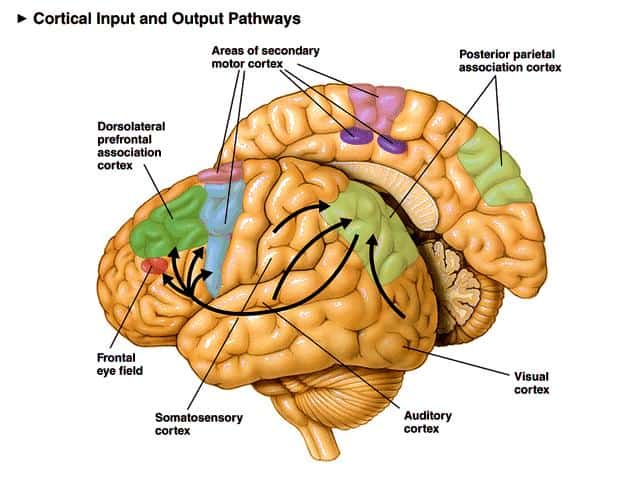 Neural pathways connect one part of the brain to another using bundles of axons called tracts. These pathways are revealed by functional Magnetic Resonance Imaging (fMRI) in the laboratory.

The black arrows in the parietal lobe (Figure 1) show pathways that information takes after it is processed in one area of the brain to be further processed in another area. In this image center, there are three incoming arrows indicating information being delivered to the posterior parietal association cortex. The short, upper arrow provides bodily location, position, and movement data; the long, middle arrow delivers auditory information; and the rearmost, third arrow provides visual data. After these inputs are aggregated in the association area, the outgoing arrow shows that the result is delivered to the an executive area of the cortex (dorsolateral prefrontal area), where it is delivered to four separate subareas for further processing.

Professor Aron Barbey of the University of Illinois (Urbana-Champaign) was recently awarded the Mensa Foundation Prize for his researches as Director of the Center for Brain Plasticity. In a recent interview by Chip Taulbee, editor of the Mensa Bulletin, Professor Barbey discussed his work and important developments in his field. His Network Neuroscience Theory of Intelligence focuses on neural pathways identified during task activities. Professor Barbey mentioned two developing areas in his research.

The Neural Network Theory of Intelligence references individual differences in efficiency and brain plasticity as the cause of distribution of intelligence. Rapid progress is being made in identification of neural pathways; however, it should not be overlooked that fMRI acuity of observation is quite granular. With a resolution of about 1 mm, every fMRI measurement is the average of a million neurons with more than a billion interconnections.

Neural Pathways of the brain are like telescopic views of the heavens. They show us regularities and patterns.

Mental Construction focuses on mental actions required for behavioral response, while the Neural Network theory focuses on identifying the neural pathway of the information.

A significant differentiator between people is the height of their Almost Gate.

The Almost Gate is a direct consequence of two neural properties (its neural threshold and All-or-None Firing). When the electrical potential received by a neuron exceeds the neural threshold, the neuron fires. In Figure 2 (with made-up numbers), of the 10 thousand incoming potentials from its dendrites, 6,012 are excitatory and 2,904 are inhibitory, which sum to greater than the threshold. The neuron fires its axon signal to neurons it is connected to. If, in another case, the electrical potential incoming is even higher, it still fires–but not with a larger signal, but with the same signal. The magnitude of the input, once it exceeds the threshold, triggers the same response. Downstream neurons receive the same signal, when the initiating information exceeds the threshold. It is as if slight differences don’t matter. Once the neural threshold is exceeded, small differences don’t matter. The Almost Gate lets them through as identical.

A person’s neural threshold is a genetic, idiosyncratic height. A low neural threshold, or Almost Gate, implies that a smaller magnitude of inputs will cause the receiving neuron to fire.

Sensory Almost Gates are the first steps in the isolation of an individual’s decision-making from the shared environment. Almost Gate abstracts and generalizes not just at first step, but every step of processing, from sensory integration into a consistent environment, but also through comparison with memories and organization with knowledge. These steps occur via the Concept Elevator.

Information traveling along a neural pathway experiences integration with abstraction aboard the Concept Elevator.

The concept elevator is a metaphor for the changes which occur in a person’s perception as a situation is melded with memory, knowledge, and needs. That is, as a perception proceeds deeper into the brain’s labyrinth, it is stepwise merged with our existing store of information and with our needs, goals, and fears. (Read sidebar “Pattern Matching is Implicit” for meaning of merge by comparison of integrated inputs.)

Semantic memory includes the emotional impact of an event when it is delivered to the concept elevator. Emotions are a decided participant in the formation of our internal worldview, upon which we base our decisions.

Knowledge is wisdom learned by experience as well as cultural values and academic theories. Knowledge and its value in our internal worldview depends on the age (stage of development) in which it was learned. However that might differ among us, various bits of knowledge are delivered as the Concept Elevator proceeds towards the frontal lobes for decision-making.

At each elevator stop, additional Almost Gates further abstract, generalize, merge memory into our understanding. This moves our internal worldview steps further away from the immediate, shareable environment.

This receding fidelity of the shared environment compared to our internal worldview is approached quantitatively in the Neural Cascade.

The Concept Elevator has many steps on the way from your initial situation to the mental worldview upon which you make decisions. There is a loss of fidelity at each Almost Gate. The fidelity loss is an expression of how much difference exists between two inputs which produce the same result—the firing of the neuron. It’s a measure of the gap between the neural threshold and the maximum input a neuron can receive.

The 100-Step Rule–about 100 neural transitions must occur between sensory reception and behavioral reaction–provides a nice round number of stops for the Concept Elevator. It’s surely not precise or the same in all cases. In fact, consider the case when you have no pressure to make a decision. Many more steps (or stops) may be tried before you finally decide to act. However, let’s just see where 100 steps leads.

Starting a back of the envelope calculation: If the fidelity loss is merely 1% at each step, after 50 steps (the inward half, to the decision point), there’s a 39.5% chance that the next time the same sensation occurs, a different neuron in the decision area will be triggered.

Naturally comparing people’s responses to the same external situation will diverge even further. That difference lies beyond one’s control or normal intention. We may describe a difference of opinion as “that person has an attitude”, but that in no way relegates the difference to insignificance or obstinacy of the person. Both sides have this divergence between the shared external reality and the personal internal worldview.

We have seen the Almost Gate, Concept Elevator, and Neural Cascade provide insight into explaining content differences traveling neural pathways. The Additional Information links below lead to more background and development of the ideas.

The Almost Gate height separates us, at its extremes, into loose thinkers and sticklers for truth. The Concept Elevator explains why and how emotions and knowledge play a role in decision-making. Finally the Neural Cascade gives insight into why we may act differently to the same situation at different times and proposes a quantitative method to investigate the differences people bring to common situations.